I’m doing this short review because one, I like headphones; two, I’ve already posted a previous headphone review (Audio-Technica ATH-PRO5V), got decent traffic, and sold a link with TLA; and three, these cans rock! I did however bought these 3 months ago, the review has always been in my saved drafts, but only finished it now. This cost me Php 7,900, bought new, and is my most-expensive pair to date. They’re not even considered high-end, mind you.

My very first impression was it looked better on photos. From AKG’s official site particularly, most probably because of the uber-dramatic photos they produced. The cans look nice though, don’t get me wrong, just not as pretty as say Audio-Technica headphones. But that’s just me. Earpads are made of tough leather, the earcups are made of plastic with a gold aluminum outline which made them look classy. The headband is made of leather, then there are two metal bands above them. The headphones adjust automatically on your head via 2 stretchable garters on either side. It seems that they can withstand abuse, otherwise it would be impossible to use the cans if they break. The cord is not too thick, not too thin. The jack is made of plastic and on the other side, a small removable mini-pl plug. Close-up photos available here.

These are circumaural, open-design headphones and they fit the bill nicely. The pads touch none of my ears – I have an average-sized ear. Weight is just right, not too light, not too heavy. The clasp is somewhere on the weak side, but it won’t fall from serious head-banging. The open design means no outside noise is blocked, and this pair really blocks almost none. I don’t know if that’s a good thing, but that means you must be in complete solitude to enjoy music and avoid disturbing others.

Let me just start by saying that I’m not an uber-critical audiophile. I know what I want, I know what sounds good, but I don’t go through as much trouble as knowing the difference in sound between two audio cables. Coming from an Audio-Technica, I found these cans too tinny at the beginning – Audio-Technica’s have exaggerated mids. Plus, they do need a decent amount of burn-in. So, after completing the break-in period, I began to understand all the fuss behind these cans. The AKG K 240 Studio is a particularly popular model by the way, spanning over 30 years of studio and home use all over the world.

The sound is bright and shiny – in a good way. Detail and tonal balance are excellent. You would definitely hear things you haven’t heard before even from really old records. I guess the strength of these cans are it’s highs. Bass is adequate and not weak, mids are a little scooped but ok, and the highs are just phenomenal. These provide a different way of enjoying music from what I’m used to. I could probably listen to music over night without fatigue. You might think bright equals fatigue, which I thought so too, but they are bright in a smooth way. Think shiny white silk. And, since I’m not really into criticizing each frequency range, I’ll just end the sound review with four words: bright, shiny, shimmering, splendid.

The AKG K 240 Studio is a good buy for me. It makes me wonder what’s still in store with the higher-end cans such as the almost-double this price AKG K 701. But I honestly don’t think it will double my 240’s performance. Probably a little improvement here and there, but definitely not overtaken badly. These won’t work well with portables like iPods because they need amplification to sound right. They won’t sound bad unamplified though, they just won’t sound the way they were meant to be. Is it worth the Php 7,900 price tag? For me it is. I love listening to music but I still can’t afford high-end home audio equipment. This is my “cheaper” alternative to audiophilism.

I can’t believe how fast my cans became obsolete. Shortly after posting this, AKG came out with the K 240 MK II, which is supposed to be a “better” version of the Studio, but, what I really have my eyes set on are the K 242 HDs. Lovely.

The new line of AKG wireless headphones are damn sleek. 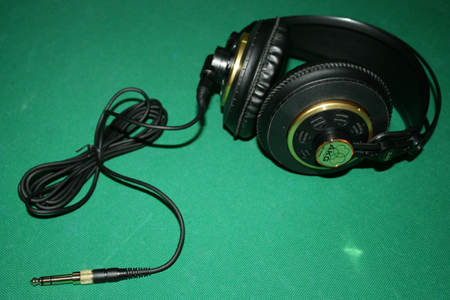