Funny how and where we ended up yesterday – pseudo Independence Day – after finding out our Enchanted Kingdom passes – set to expire on June 12, 2008 – was already worthless. Enchanted Kingdom had gone back to operating only on weekends, so June 8, was the last Sunday of our tickets – technically, yesterday. Pissed, I decided to spend the rest of the day in always-makes-me-happy Mall of Asia. Feeling very old-Manilaish, me and my girl started talking about “tripping” on Luneta Park. Then the more reasonable, more fashionable “Let’s just go to Ocean Park” thought came. “Luneta Park, we shall return.”

Manila Ocean Park is only halfway there – the whole left wing is still unfinished. Anyway, I’m not one to review parks, let alone “ocean parks,” so let’s just continue with the story of my “Independence Day” holiday. We had assumed the park would be packed, so low and behold, we had a good hour and a half of waiting just so we can line up to buy tickets. Once #641 was called, we fell in line like one would in a Meralco bayad center. Tickets cost Php 400 each, Php 350 if you’re below 4 feet or something.

Oh, I remember the 2 buwayahs who had wanted to sneak up on everyone (who patiently waited in line for hours). “Manonood lang kami sandali,” said one buwayah to the ticket collector, whilst flashing his “gold card.” “Sandali lang po sir.” It was then the security guard’s turn to deal with the men in uniform. What seemed like a very polite conversation resulted in the buwayahs being ejected from the premises. Good job Mr. Security Guard, not everyday you see that happen.

Here come the “fishies.” I’ve never been a fish dude, even though I’m surrounded by Arrowana enthusiasts my whole life. I’ve presumed my stint there would be a look-and-proceed type process, but I admit to being awed by the really big and weird creatures. It’s not everyday you see sharks, and crabs who can eat you alive. Other than that, they’re all just fish to me. Colorful, ugly, really-ugly, Nemo, and Flounder. Construction of the aquariums is nice, like the “under the water” walkway, but had it been my first time in one of those then I would’ve been more amazed.

The layout is alright especially just after the main entrance. You’ll encounter this tropical-jungle type facade which includes some pond-like aquariums and a waterfall. After that, it’s just aquariums and darkness. Then there are gimmicks to attract more attention. I remember in particular the small pond which allows people to touch the fishes. This foreigner in front of us took advantage of the fact that her camera is waterproof. Then someone made this very attention-grabbing but not-funny hirit of doing the same with his SLR. Unfortunately, the girl did not understand; so did we, probably.

Then there are boat rides – small boats with clear flooring – above the shark aquariums, and a fish foot spa; none of which we tried. Of course, these are not covered by the entrance fee – typical. The fish spa looked really interesting though, check out the picture I took and commentary here.

Before finally exiting the premises, they’d make you go through the classy restaurant and the souvenir shop. No exceptions, you really have to walk by the people eating and then through the store. The dinner buffet, if I remember correctly, costs Php 250, and has a romantic view of the ocean. The souvenir shop is well, typically overpriced but has better quality items (than most). Only then would you end up back into the main circular lobby, which is also by the way filled with foodcourt-type stalls.

Since only half of the park is finished, I wonder if admission would also double up upon completion. I also wonder what other creatures they plan to house in there. Although come to think of it, I saw no dolphins, nor octopussies.

The park is directly behind the grandstand. There are no signs, none that we saw of, so far. There are parking lots on either sides, and one is just beside the enormous Floating Hotel and Restaurant – now in my “to visit” list. All in all we spent almost 3 hours there – including waiting, eating and yosi breaks.

Remember, the Ocean Park album in the gallery tells the same story, with color, so I’m quite surprised you read up to this point. Next up, some videos in my YouTube channel. June 9, 2008 ended in Mall of Asia to check out more helmets and for dinner, so all in all, I had a great one. 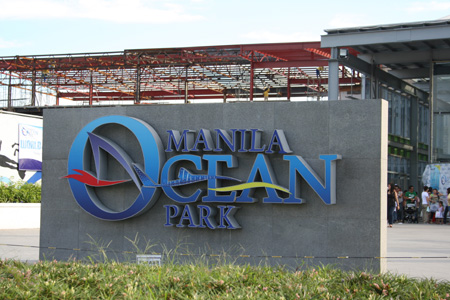 One thought on “Manila Ocean Park”