So, it took me a full three days before I finally got my AdSense money from Western Union. On the first day, I tried to make it to the bank – BPI Alabang Town Center – but I arrived 10 minutes before closing. Naturally, that was my fault; it was too late to have them process Western Union stuff. Good thing I knew of another Western Union branch – inside True Value Alabang, about 20 meters away from the bank. I had printed my AdSense details and my control number on paper. I gave it to the agent and asked, “Miss, meroon kayong Quick Cash?” The agent carefully read the details on paper and proceeded to input some data on the computer. After a good 6 minutes the agent said, “Sir, wala kaming ganito. Try nyo sa may Pasong Tamo.” I did not ask any further questions because I had this idea that not all Western Union branches offer this service. And besides, the branch in True Value was a very small stall. I had to go to one of the larger Western Unions in my area but my car was coding on that day. I remembered another branch inside Pilar Village. I knew I could get there without being caught – via Friendship Route. “Sir, naubusan po kami ng pera ngayon eh. May nag-withraw kasi ng malaki, balik nalang kayo bukas.” Bummer.

The next day I made the same mistake of bringing another bawal car – my sister’s, since she brought to work that which was coding the other day. I went to BPI and I was early. “Pwede na mag-Western Union?” “Ay sir, meron pong problema sa connection namin. Ito nga po si sir, 12 o’clock pa nag a-antay dito.” Great. I still could not go out to the main roads and the idea of going back to Pilar Village… well, I got lazy. I’ll just stroll around the mall once again, maybe I can score on a hot mama (joke). I knew I had to go out again eventually within the week so I’ll just re-schedule whenever.

On the third day (third attempt), I again proceeded to BPI – well, that’s where my dollar account is anyway which is why it is always my first priority. “Sir, nasira po connection namin sa Western Union.” “Ha? sa lahat ng BPI?” “Opo, sir.” Mother funker. Was already on my way back to the parking lot when I thought, let’s walk this whole mall from end to end and see if there are other branches. None. I’ll try True Value again. Great, not the same agent as the one before. “Boss, mag c-claim ako ng pera.” I gave him my already-battle-scarred paper. “Sir, paki-fill up lang po ito.” Wait a minute, this might work! I silently filled-up my money claim paper. “Ok sir, yung butal po ipe-peso nalang natin ha, kasi wala kami small bills.” No problem, as long as I get my money. It worked. After he’d handed my money, I decided to tell him that the other day, the other agent claimed that the service was not available in their branch. “Sir, baka po wala pa yung pera nyo nun.” Impossible, it was already near the end of the first week of November. “Sir, baka po may error lang sa system.” Whatever, hindi mo nga naman siguro ilalaglag ang kasamahan mo.

I might have spent Php 500 in gas in those 3 days. That’s a $10 fee in theory. Plus, the chances of getting system system glitches, errors, money shortage, I never thought so many things could go wrong, and it all happened to me in my first try. With DHL, I’m like this spoiled bastard waiting for them to spoon feed me my money. It was quick, was always on time, and I could even ask anyone who’d go to the same bank to deposit it for me. I don’t know… maybe I’ll give Quick Cash another try. If anything goes wrong again, I’m going back with DHL.

Here’s one topic that will surely circulate the Philippine blogosphere in the next few days so might as well have a Thoughts In Binary take on it. Thanks to Rhodilee.com for catching my attention by linking to my Some dude stole and cashed my AdSense check! post – now I know linking to my blog is the faster way of getting my attention (over sending an email).

I’ve seen some posts on the issue but the question of “How much?” – referring to transaction fees – still remains unanswered. If it is $2 or more cheaper than the $24 DHL service then I’m taking it. I specifically said $2 because the nearest Western Union branch (outside the village) is a 5-kilometer round trip so I have to account for gas. Would be interesting to see the first posts on first hand experiences since payment is just around the corner.

Since my stolen check incident, I’ve decided to give Secured Express Delivery a try. Today the DHL guy delivered my AdSense check. That was fast! For me at least. No more guessing game on when my check will arrive or if it will ever arrive! According to my account, payment was sent on October 23, 2006. Came in on the 30th, a lot better than coming in on the 15th (normal arrival using standard method in my location). Plus, as with most courier services, there’s a tracking number which you can use to “keep an eye” on the document. Definitely worth the $24 processing fee. 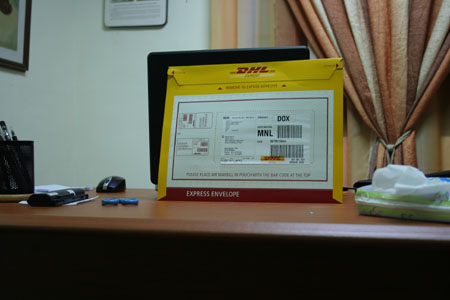 I’ve been itching to publish this… So it has now been 3 months since I last received an AdSense check. The first month I was alarmed since Google checks come in like clockwork. But I figured what the heck since S happens anyway. The 2nd month it still did not arrive in it’s usual time frame (2nd week of the month here in the Philippines). I cancelled the first check that did not arrive on the 25th, as per Google’s policy, and since I was more worried this time, I tried to ask Google if they can put a stop payment on the check even if it was only around the 15th of the month. Walla! They said that it has already been cashed and I should check my bank records. WTF!? I doubt that Google would have a bug in their system so I started to think… Did I? Have I? But any way I look at it I know that I’m not mistaken. So I politely told Google that I in fact have not received the check nor cashed it. Luckily they replied that they can send me a scanned copy of the cashed check but it would take about 3 weeks. I followed this up after about 2 weeks and they replied with an attatchment.

Some dude stole my check, signed it, and cashed it. Luckily, we could still see the details in the back. It was cashed in East West Bank in Dagupan. Obviously we called that bank and complained. Next thing I know some dude from a money-changing business in Dagupan called me. It seems that the guy who had my check sold it to the money changer. I didn’t even know they could do this. First of all that would be double endorsement. You just can’t cash a check with someone else’s name into your account. But since these money changer guys have lots of money in their accounts, they are given exceptions. We were told by the money changer that before they buy checks they ask for valid id’s. We asked a copy of the id’s but they haven’t sent us any.

The only good thing about this is that the money changer agreed to return my money. I guess it’s their loss because they already paid the guy and most probably won’t ever see his dumb ass again. That MF SOB!

The culprit? I only have one suspect. Those nice people at our local post office who calls me by my first name and tries to small talk me every time I’m there. I just know. F them!

Now due to this incident I’ve asked Google to cancel my 3rd check and they did even though it still wasn’t the 25th. Thanks G! I’ve also selected the DHL service even if it costs me around $20/month. I guess that’s what I get for being a cheapass.