First off the list, one of my beloved axes – a 1994 Epiphone Les Paul Standard, which, from hereon after, shall be named “Leney.” I don’t usually name stuff (cars, guitars, etc.), I think it’s silly, but for the sake of this post…

I got Leney from a straight trade back in 2001 – swapped with an Ibanez RG series with a sweet, sweet hardcase (my first “real” guitar). The “Epi” came with nothing. No history, no stories, not even a case. At that time (2001), my high school band was already falling apart, and my two other bandmates had started playing in some side projects. All I had was my on-time graduation and my nerd-ish computer degree.

By the way, my other high school bandmate (and guitarist extraordinaire), Flo, was my swap-mate. I figured, my Ibanez was so virtuoso-ish that it would bore itslef to death (in my hands) playing a bunch of Moonpools covers. To this day he still has that Ibanez RG, but I forget what cheesy girl’s name he named it with. See my ex-Ibanez in action here.

Back to Leney. Chubby Cheeks: Ang Bagong Ama, my drummer from the same high school band, invited me to jam with one of his side projects when they decided to add another guitarist. My first real band (post high school), and Leney‘s career was born.

My first gig with Leney was at an underground tugtugan in San Pablo. Back then, nakiki-underground lang ako. I liked the idea because it sounded really non-conformist and galit! But fuck, I was from Ayala Alabang, I was the opposite of “underground.” I feared for Leney when I saw the scene. She had no case which meant everyone had to see me (as if) flaunting it prior to our set. During our set, one of my worst fears happened – something hit Leney – a coin. It hit the strings. Thank fuckin’ God. After the set, the worst thing happened – part of the crowd slammed into our group. Me and my other bandmates  (what heroes) shoved our bodies in front of Leney like it meant more to us than our own balls. Not a scratch.

Eventually, I formed another band soon after that first gig, a female-vocalist fronted one, one which I led. Suffice it to say, this guitar inspired me to be in a band again, and from 2001 to late 2007, both of my bands were active, and Leney was part of the circulation. She was also to be immortalized in some compliation album in 2003. Back then, choosing which guitar I’d bring to a gig followed this simple rule: for my all-boys band (the one referred to in the first gig), I would bring Leney, but for the female-fronted band where I was the lone guitarist, I preferred the more versatile sounds of my other axes (e.g. Parker P-42).

To you, its future owner, this axe is (was) so loved and it has lots of stories to tell. Make it sing.

I am under the assumption that you already know the price, etc. of this guitar because I linked here from the classifieds for reference. If however, in the insane chance that you ended up here looking for guitars for sale, contact me: mark.verzo[at]gmail.com. 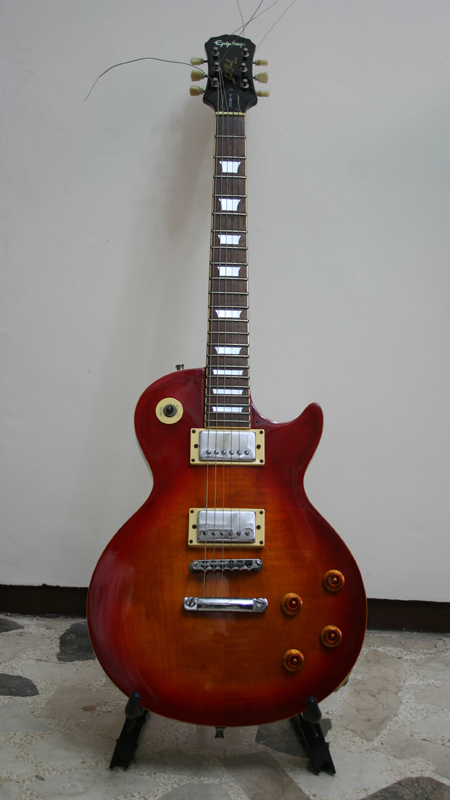