I love anything and everything audio. I believe it was Attorney Arambulo who said “Buhay mo audio,” some ten years ago, when he’d catch me tinkering with my car’s stereo at home instead of being dressed for the night-to-be-gimmick. I have been fascinated with car audio for at least 10 years now, I have spent 15 years in quest for the ultimate guitar tone and recently, I’ve been trying to break the hi-fi scene with budget systems and head-fi (headphones).

I’m no Audiophile. For me, the ultimate audio nirvana is a live performance. Fortunately, I find myself in a live performance or watching a live performance at least once a week. The path to a good sounding live performance (musician) is as tricky as reproducing music that is “as close to the original” as possible (audiophile), but are two very different things. However, the freedom to listen to whatever you want whenever, is a privilege to the audiophile.

Since my entry-level Sennheiser HD202 is still as lost as my Palm Treo 600, I decided it was time for a much needed upgrade in cans (headphones). This is my first attempt at reviewing an audio product, and I will only go as far as describing build-quality, comfort and tonality, with some comparisons for each category. Welcome to a new category in my blog.

I have some up-close photos of the headphones here. The jack is a gold-plated 3.5 mm stereo headphone jack that comes with a screw-on 6.35 mm adapter which is also gold-plated. The cord runs on only one side and is coiled and thick. It is heavy and I don’t recommend stretching the coil because the weight will literally drag you down. The outside area of the earpieces are made of tough plastic. It looks brittle and might be prone to cracking as compared to my Sennheiser HD202s, which will probably bend or dent first before cracking. The earpieces rotate 180 degrees – for DJ use. There’s a thin wire that’s exposed which runs from the earpieces to the headband. It extends as you adjust the earpieces. They might get caught on something but they look tough. The headband has ample padding, not like the ATH-M50 which is a bit overkill. By the way, PRO5V means it’s silver, PRO5 is black, and there’s also a camouflage version of these cans.

The ATH-PRO5V is considered circumaural. For me, it’s only semi. It’s also kind of tight (clasp) so I wouldn’t recommend it for long listening. The Audio-Technica ATH-M30 has the same size earpiece but has a deeper groove (so you fit more of your ear). The PRO5V has a tighter clasp than the ATH-M30. I find this ATH-PRO5V as uncomfortable as my HD202s. The ear padding is made of that thin shiny leather-like material that traps heat so you are prone to sweating. These are closed-back headphones and do an excellent job of isolating noise.

I’ll describe the PRO5V’s tonality by way of comparison. Until now, the HD555 is the best-sounding headphones I’ve spent a considerable amount of time with. I describe the sound of the HD555 as “white.” It’s clear, smooth and very well-detailed. Comparing these with the HD555 makes the PRO5V sound really colored and dark. The HD202s on the other hand, are just my all-around cans. I never really liked it’s sound but it’s cheap (Php 1,400) and decent.

These are what I was able to audition in the store. Of course, I was only deciding between the ATH-M30 and the ATH-PRO5V but the staff was kind enough to let me audition their other cans. First off, the ATH-ANC7 which is valued at Php 12,000. These cans are in a league of it’s own. They are active noise-cancelling headphones. It uses 2 AAA batteries for noise-cancelling but can work without. Without music, noise-cancelling is like covering your ears tight with your palms. You can still hear and understand people talking but other noises are practically gone. With music, turning on the noise-cancelling feature is like making the music louder. In reality, it just seems that way because the only thing you can hear is the music itself. It’s considered active because they have microphones. Microphones pick up sound and they are reproduced through speakers, these cans have some sort of “reverse speakers” that negate the sound instead of reproducing them. The sound of these cans are unbelievable. It still carries what for me is the Audio-Technica signature sound – warm and darkish. The PRO5V is nothing compared to the detail and overall sound of these cans.

At first, I couldn’t tell the difference between the ATH-M30 and the ATH-PRO5V. Finally when I was able to tell a slight difference, I figured that the PRO5V is more “in your face” than the laid-back M30. I would probably consider the M30 for longer listening sessions and the PRO5V for monitoring.

I was only able to spend about a minute listening to the ATH-M50. My real first impression was that it sounded like the M30 but was thinner. I figured it’s something that needs a lot of breaking-in. I can’t comment more on the M50’s sound.

I would consider these cans excellent for monitoring and mixing. The instruments are well defined and you could almost block yourself from listening to a particular instrument only. I also noticed that guitars sound meaner more real. This led me to testing them with my guitar (hooked on a ToneWorks processor). These are by far the best headphones I’ve used for guitars. The mids of these cans are really out there – which is probably why it sounded great for guitar monitoring. However, it (mids) can also be “too much” for other applications. In particular, I don’t like how vocals sound in these headphones. They sound too sticky and not-lifelike. They sound too “brown” (maybe dark brown) but not tube-like. There’s also the fatigue factor, so it’s not good for long listening hours. I can see myself using these headphones for learning guitar parts or other instruments on recorded materials.

These are worth Php 3,660 with an additional 10% off for cash buyers. I bought them at Hi-Fi Lounge in Festival Mall, Muntinlupa (Philippines). I do not regret not choosing the ATH-M30 (Php 3,000) over these because I figured it suits my (all-around) needs. It’s definitely an upgrade from my HD202 but I think I need another pair suited solely for listening. Other than that, let me just remind you that this review is personal and I don’t expect everyone to agree. It’s always best to listen to them yourselves. By the way, I used a lot of different sources for these cans (amplified and unamplified) and not just the usual iPod. If you’re not from the Philippines, you can buy these headphones online at Amazon for only $49.99

. Click on the image below to see more photos. 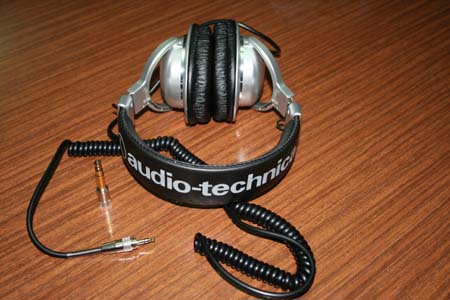 3 thoughts on “My Audio-Technica ATH-PRO5V”