Finally decided the Vision:M was my “iPod” of choice. I bought this last Monday (October 22) on BPI’s 0% interest, 12-month installment plan. It cost me Php 16,999 @ Php 1416.58 monthly. Electroworld, Alabang Town Center was the only store down south that carried these, and only came in white, hence, that’s what I ended up with. Also, it came with a free universal power adapter (socket charger) worth around Php 2,500. First, let me lead you to some photos I took, and a short “experimental” video to match.

I never really liked the idea of limiting myself to iTunes so an iPod was never really in order. However, the recent release of a 160 GB Classic was enough to tickle my fancy. In the end, I thought that having a 160 GB device without being able to use it as a sort of storage device was useless. I don’t have that much songs, nor videos. Being able to “cut and paste,” as well as play a vast array of media file formats was what I really wanted – download videos, copy straight to ZEN Vision:M, ala USB thumb drive.

Up to this point I haven’t read the manual. I did what was vigorously printed in the box and on the unit (via sticker). “Do not connect the unit without installing the software first.” I’m not that “daring” so that’s exactly what I did. The installation disc came with Creative’s Media Explorer, MediaSource 5, AudibleManager, and Windows Media Player (I think). Media Explorer is the only thing you need, MediaSource 5 has some handy music and video converting tools, and a built-in player – I did try it, it was ok – but I already have programs for those.

Thanks to my free charger, I only waited 2 hours before actually plugging the Vision:M to my laptop – by the way, without an external charger, the only way you can charge is via USB (yes, I know it sucks). It was detected in an instant. I opened Media Explorer, and dragged a couple of videos and test tunes. It took me a good 5 minutes to fully navigate through the player. Prior to this I don’t know what a Touch Pad was. I figured it out and thought “Ah, ala iPod!”

Videos are so damn clear. The screen is really small, but somehow, I find watching videos here over the bigger-screened P990i more pleasing – because of the resolution and color depth. I tried watching a full episode of Heroes, I need not rewind to review “I don’t think I saw that clearly” moments.

On to music and sound quality. I am really particular with sound quality, which is why I spent weeks researching how the Vision:M fairs with other portables. First of was the stock earphones. It sounded better than my 10-year old JVC headphones, and my Php 615 Philips SHP 1900. These earphones are not cheapo throw-it away earphones. I believe Creative spent much time getting it to match well with the player. I haven’t heard my music files sound this good in a long time. Hooking a laptop or computer to your sound system does not do it in terms of sound quality. You need a good DAC (Digital-Analog Converter) – found in your soundcard – to make it sound good. Now, unless you’re running a Php 10,000 soundcard, your stock DAC sucks. In the Vision:M, I believe that everything from the DAC, to the small thing that amplifies the earphones are above par. This thing sounds good.

I’ll reserve the minor (unimportant) details of it’s sound quality in other forums. Overall, this player packs a wallop. It’s millimeters thicker than an iPod (does it really matter?). It’s got style as well. Especially that ripple effect on the back. The back portion is made of metal, the front made of standard iPod-like plastic. I’m sure it scratches quick so I really need a case for this. This is my first Portable Media Player (but I’ve had numerous encounters with iPods and others), and I am in no way regretting my choice. Creative ZEN Vision:M, at 60 GBs, for me it has everything, and then some. 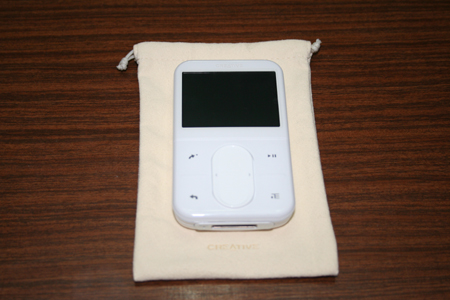 13 thoughts on “My Creative ZEN Vision:M”