Visited the Trans Show on it’s last day earlier; we arrived late, around 8:30 p.m. I just have to say though, up until 9:30 p.m. when we left, people were still buying tickets. Tickets now cost Php 60 for adults; if I remember correctly, last year it still cost Php 50. Still the usual suspects – Civics, Japanese tuner cars. There weren’t any notable supercars except probably for the Dodge Viper. I don’t even recall seeing a Ferrari or a Lambo. There were a bunch of really nice restored Buicks including a Buick model Eight. Anyway, moving along, what I really want to comment on – you’ll read below.

The girls of Trans Sport Show 2008

I just have to say, the quality of this year’s show girls improved dramatically. If I may, most probably threefold. In this year’s batch, 80% could make it as commercial models. And that’s saying a lot. Tisays, chinitas, pinay beauties, schoolgirls, and everything in between. To even more clearly get what I mean, here’s an excerpt from me and my girlfriend’s conversation – “Ang daming maganda ngayon no?” “Oo nga eh, saka hindi katulad dati na parang mga galing Pegasus.” Here is most’s favorite, because of the Jav Idol appeal, here is Ms. Trans Sport Show, but this one, is my pick.

Just remembered I’m usually first on this one. Trans Sport Show, that car show I’ve been going to 12 years in a row now, is turning 17 this year. Imagine that; or rather, imagine SM Megamall is now also 17 years old. Yes, it’s still going to be held at cramped-up Megamall, not the new SMX Convention Center, even if Tradeshow International, Inc. (organizers) have already utilized it for Manila Auto Salon 2007.

With all that out of the way, here are some details about this year’s show. April 16 – 20, Wednesday – Sunday @ the Megatrade Hall. This year’s theme is “A Tradition of Auto Restoration Excellence.” Then there are the usuals – seminars, awards, Ms. Trans Sport Show, etc. Tradeshow’s site is under construction; you can contact them directly at 6718381 â€“ 82 or 6713122. This post will be updated regularly. 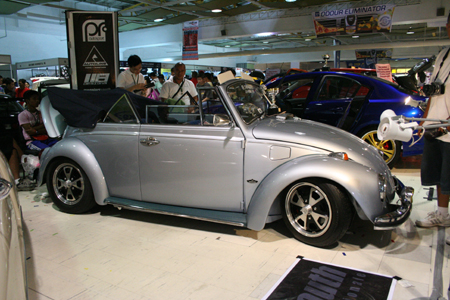