April 17, 1993, a day I will never forget. My first concert, my favorite band. Indeed one of the best days of my life.

It was then only a year after Metallica released the “black album.” Enter Sandman, the carrier single, was huge – open low E string, 7th fret 5th string, 5th fret 4th string, then 6th and 5th fret low E string – if you’re still with me, this is probably one of the first few riffs you learned on the guitar. And, because of songs like Enter Sandman, and bands like Metallica, I played guitar obsessively. I played guitar while I crapped, and I wanted nothing else but to be a guitarist in a band.

I could only imagine and try to remember the look on my face when I saw the ad in the papers for their concert. I would not miss it for the world. It was not a question of whether I’d be allowed to go or not because I knew I will, even if it meant going alone or being hassled by my parents. But, my parents knew about Metallica, they see the cds I buy (with their money), the Guitar World magazines, their concert videos (in vhs or laser disc). I had asked my mom to go to the place where they sold tickets, I asked her to buy the most expensive, the frontmost, the best tickets available.

April 17 finally came. I remember we had some “transpo” problems early that day, so I, the desperate fucker that I was, asked my mom to bring us to Ultra. My friend and his brother hitched with us. I still remember the worried look on my mom’s face when she saw heaps of metalheads in black, tattooed, long-haired, surrounding Ultra. “Anak, mag-ingat kayo ha.”

We were already in line early even if we didn’t have to. We were early. This was about the same time I learned it was totally fine to wear another band’s shirt in one band’s concert. I don’t know why I remember that clearly. Another thing I remembered vividly – while we were in line, a loud distorted guitar suddenly played the intro to Enter Sandman‘s riff. People went wild. All the hairs on my body stood up.

Finally inside the venue we arrived at our numbered seats. Old school rattan chairsÂ (think “Trip To Jerusalem” in birthday parties). ‘Di pa uso monobloc nun. Razorback and a then Karl Roy-fronted Advent Call were theÂ opening acts. I could picture Metallica hanging out with them backstage. Metallica was coolÂ like that. Lucky, lucky bastards. After the two bands fronted, it was already dark. I was excited as hell, but I didn’t want time to fly fast because I knew I wanted to stay in the moment. Part of me did not want the concert start.

Their rock star-looking roadies started sound-checking their guitars. Hammet and Hetfield’s ESPs. Damn. The crowd, as if they didn’t lose enough energy from the front acts, suddenly felt a new surge of power and excitement within. Metallica was about to go up stage. What happened after was probably the loudest BOOM I’veÂ ever feltÂ in my life. After the smoke cleared, I finally saw my idols – James Hetfield, Kirk Hammet, Lars Ulrich and classic Jason Newsted (unfortunately,Â his undercut was already cut), harmoniously playing that intro to Enter Sandman. It was surreal, it was loud, it was fucking LOUD. Wish I never woke up from that dream… 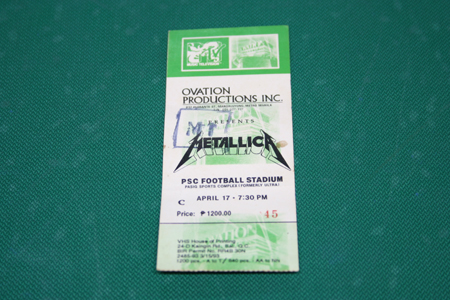 43 thoughts on “Today is Metallica day”