So, my mom bought a new car – a very practical one; a 2008 Toyota Vios, G model. “G” is Toyota’s way of saying the car is in the top of it’s class – all the amenities, mag wheels, higher displacement engine, the works. Only thing we didn’t get is the insane 40+ thousand upgrade for leather seats. Ours is an automatic with a 1.5L engine, so basically, it’s the 2nd most expensive Vios (Php 765,000.00) around.

In this review, I will not bore you with numbers and 0-100 km/h statistics. I took pictures of the car from all angles, and added captions and commentaries for each picture. I took into account the average small and young family looking for a daily driver for “pops” and a weekend ride for mom, pops, and the yet-to-go-to-school bulinggits. In my opinion, the Toyota Vios does not serve any purpose better than this.

Of course, there are choices. Basically, the Vios is a level lower than compact cars. Compact means Honda Civic, Toyota Altis, Nissan Sentra. Of course, in the Philippines, smaller is better – easier to maneuver through traffic and parking spaces, and better gas consumption – which reminds me to include here the 15 km/l it gets on average. 15 km/l – that’s nearly twice what we used to get from the 90’s Civics, Corollas, etc., and a Php 50 costing trip from Alabang-Nichols. Technology is getting better in producing more kilometers per liter, but gas prices are getting higher. Ergo, everything stays the same.

Back to the choices. The only other sub-compact in my list is the Honda City. Of course there is the Honda Jazz, but it became more of a “porma” car than a family car. The Honda City has a 1.3 engine. In Toyota’s defense, a 1.3 liter engine consumes more gas because it’s hirap. I say, Honda has VTEC and other advanced engine technologies so basically they consume the same amount of gas and produce nearly equivalent power outputs. Brands-wise they’re both Japanese. But to put it in a more apt perspective, a Toyota will surpass at least twice it’s life expectancy and a Honda, is well, a Honda.

This is slowly becoming the most boring Toyota Vios review ever, so let’s proceed to the more exciting life in color. Click on the picture below to view the review and do share your knowledge and opinions about sub-compacts for comparison. 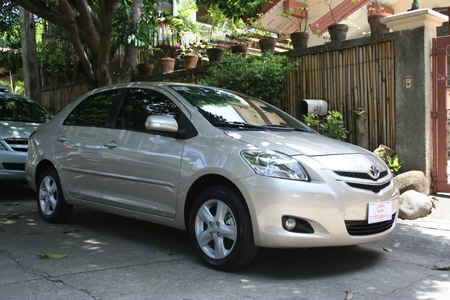 16 thoughts on “The best Toyota Vios review ever”