Went there Saturday afternoon, April 25, which most probably was the busiest time of the show’s 4-day stretch. I don’t think I liked anything in particular that much; before, when there was so-sweet-a-ride, I’d go as far as visiting it a second time. This year, none. Maybe my taste has gone where my age has, I don’t know.

Another crazy thing worth noting, people were like paparazzi on viagra. Remember the time when having a DSLR was cool and unique? 2-3 years ago, it went from that to being the “in” thing, to being just regular. Now, it’s just annoying. People were lining up and “bunching” up to take pictures of the girls which would’ve made even Britney jealous of the attention. Noong araw, I needed to compose myself and suck up some gut before I could even ask the girls to pose for pictures.

But there were a lot of hot girls. Because I could not find any “worthy” cars, I devoted my time and attention to the models (yes, I proudly took advantage of the paparazzi movement). There were high-class (and high-priced) promo girls, gro-looking girls, then some so-so girls. Ms. Abby “red head” Poblador (Playboy February 2009) won Ms. Trans Sport Show, and the only other one who seemed to have some form of fame was Ms. Paulene So, who appeared in Maxim’s March issue. I’m sure there were other notable figures.

Anyway, I was also there in support of our El Presidente and Phat Audio big boss Alvin Cu, who shook the whole Megamall with his “King Kong” Mitsubishi Space Wagon. Congrats, parekoy. Click below to see the whole photo set and to have a first-hand feel of my trip (and the show) as I say it how it really is in my commentaries. 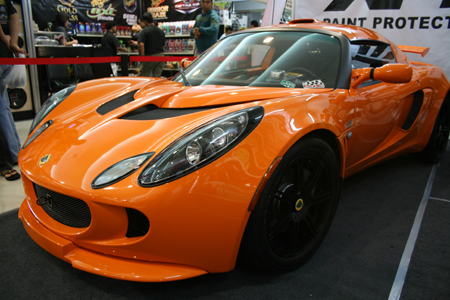