This is a bit late but still hot news (no pun intended). Last July 22, around 8 a.m. traffic along South Luzon Expressway (SLEX) was (once again) halted, but not in a way any of us (SLEX users) are accustomed to. A red Ferrari F430 caught ablaze just before the Susana Heights exit. Sources say that the Ferrari was part of an 8-car convoy that included some BMW’s and Porsche’s on their way to Tagaytay.

The car is said to be owned by a certain Sevi Oliva, the biggest importer of exotic cars here in the Philippines. The car costs around Php 20,000,000 including taxes. Ferrari will replace the vehicle if the accident is proven to be a factory defect.

That Ferrari model (F430) is known to have a burning or overheating issue (see Safety Issues). There is even a recall for a flaw in the design of the clutch pump. But, some discussions in our local forums claim that the exhaust of the vehicle was swapped for an aftermarket upgrade which might also be a cause.

The pictures (including the one below) scattered all over the internet were taken by a certain powershift, a member of Honda Club Philippines. Unfortunately, only a few sites credit the original photographer. The news definitely started in Honda Club because there was a subgroup (EK Elites) that was also on their way to Tagaytay (funrun). It (topic) was then adapted in a couple of other local automotive forums. Videos were said to have been taken but none is still put up for viewing.

And, the Fita biscuits reference, where they say the fairy might drop the back-half of the car – “Gusto ko ng sports car, yung red!” More pictures here. 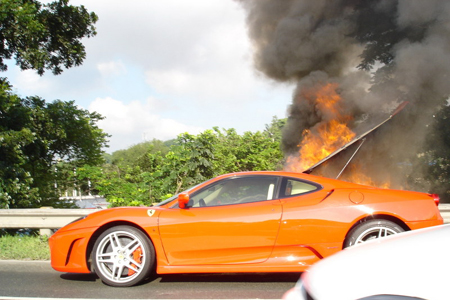 Stoplight Mag, the Philippines’ first direct-to-inbox online automotive magazine (not sure what that means), held their grand launching last Saturday July 28, 2007 at Hobbies of Asia, along Macapagal boulevard. They dubbed the show “Go lang ng go! Team Stoplight Goes Global,” and lined-up the day with a something-for-everyone itinerary. Among the activities were demos of RCs (helicopters and drifting), drifting demo, slalom demo, live music (bands and DJs), a car audio competition, and the usual extras like free booze and other contests.

The categories of the displayed cars came by way of car clubs or teams; which is actually kind of cool since clubs are already segregated to a common theme. And, attendance naturally comes by way of “support” for fellow members – which is exactly the same reason why I spent almost an entire day at the venue.

The heat was unbelievable; thanks to the incomprehensible weather we’ve been experiencing for the past couple of weeks – summer during the day, heavy rain during sundown. This of course led to some delays in the activities particularly the audio competition and the drifting demo. The drifting demo was really admirable. The drivers were good, possibly world-class. Stupid that I brought a near-full memory card (pictures) but I’ll leave you with the most I could do.

I just came up with this weird, but useful, idea of compiling a list of Philippine-released cars and their consecutive gas mileages. This list may take long to fill-up but in due time I hope I would have listed a handful of cars and their estimated fuel consumption, with a brief explanation for the source. Let me start with those that we’ve owned.

Gasoline version 8.4 kilometers per liter. Based on the Innova’s useful gas consumption meter beside the clock. Averages 10 km/l in the highway and 7 km/l in city driving.

Diesel. Averages 8.0 kilometers per liter. This is my personal driver. Vehicle has been maintained regularly but has been modified heavily.Â

Please feel free to comment, add and correct the figues with your own findings as a result of personal experiences, word of mouth or research.

This May 19, 2007 at the Metrowalk. This is a carshow with a fashion show. Also, for bassheads, there will be a dBsport competition with three classes – street class, mild class and wild class. Each class is divided from 1-4 subwoofers. Registration starts at 1 p.m., Php 1,650 for the street and mild class, and Php 1,850 for the wild class. Visit KotseAudioClub.com (registration required) for more details.

Just can’t get enough car shows. There’s another one, this time at the Clark Picnic Grounds, Pampanga. May 6, 2007. Pretty exciting theme – Hot Rods. I just wonder why they chose a very off venue. I’m guessing since Pampanga is Americatown, and Americans love hot rods.

Sa Cavite!? This May 5, Saturday. Event is from 4 p.m. – 12 p.m. There is an entry fee of Php 50, which includes a free beer. I haven’t been to the place, I’m not that familiar with Cavite, but they say it’s only 10 minutes away from Alabang via Daang Hari. What caught my attention here is the Hottest Lowrider category. I haven’t been around lately; just wondering what new creations I’ve missed. Here are someÂ images I stole: a map to Total, promotion poster 1, promotion poster 2.

Actually, it has been there for a while; IÂ first encountered it probablyÂ sometime in February, but recent beer-drinking sessions obliged me to dicuss the matter further. I myself missed the exit twice – the first time was of course excusable and the second time, well, let’s just say ten years of going out the same exit on a near daily basis is hard to undo.

Northerners: What the hell is this guy talking about?

The old Filinvest, Alabang exit – the one right after the Alabang bridge has been closed indefinitely. To access Filinvest, there’s a new exit rightÂ before the real Alabang exit – the one that leads you under the bridge and into the Metropolis chaos zone. It can be missed easily -Â whichÂ then brings you to the Susana Heights exit just to go back northbound-SLEX and exit Filinvest in the opposite side. Remember, the new exit isÂ before the Alabang bridge and right before the real Alabang exit.

I just saw another auto show being plugged in Solar Sports. It starts today, April 27 until the 29th and will be held in Metrowalk, Pasig city. I don’t have that much details. I remember seeing a couple of artists scheduled to play, hip-hop mostly and Kjwan probably the only band there.

Wondering though why they called it a celebrity weekend carfest. I’m guessing it’s that annual show organized by the Gutierrez brothers, which last year was held somewhere in the middle of the reclamation area in Manila.

Went to the Trans Sport Show earlier today. Was not really able to really check out the rides,Â had limitedÂ time. The Lamborghini was hot. Then there were the usual army of uber-modified Japanese cars. Starbright body kits had theÂ wholeÂ space in the middle. I wonder what kind of deal they got from there. Then there was Kristine Hermosa; obviously she was with Diether. Anyway, I’ll stop here and just let the pictures do the talking.

Now on it’s 16th year, this year’s Trans Sport Show will be held on April 18-22. As usual, it starts on a Wednesday, ends on a Sunday, will still be held at the SM Megamall Megatrade Halls 1-3 and, is open from 10:00 am to 8:30 pm. The year’s theme is “The Car Show for Enthusiasts by Enthusiasts!”

I was kind of hoping this would be the year they looked for a new venue. It gets really crowded in SM Megamall especially during the weekend the event ends. Every year I’m sure their attendance grows, but their accomodation stays the same. Too bad since this is the “show” where all other local auto shows are guaged; and, Tradeshow International, Inc., the event’s organizers, has the most auto-related affiliations in the industry. Not to mention, theÂ most number of car shows by the same organizerÂ including the Custom Car & Sport Truck Show, the Vintage and Sport Car Festival, Concours d? Elegance and the IASCA Nationals.

But still, I, like all other car freaks out there, am still looking forward to it. Surely, this year’s batch of show cars will be debuted in the Trans Sport Show, then the cars will make their rounds in the lesser known shows throughout the year; making them havens for “Nakita ko na ‘yan” cars. Oh, and the girls as well.

I was able to catch the last day of the 2nd Manila International Autoshow, thanks to a pair of complimentary tickets mailed to my mom. It was held at the World Trade Center in Roxas Boulevard, a venue that dwarfs the Trans Sport Show‘s Megatrade Hall in all aspects. It was not really a tuner’s paradise,Â the cars’ themes were split even from exotics, the latest, the rare, and the one-of-a-kind. There were all sorts of side events outside including a stunt driving show andÂ off-roading, none of which I was able to see due to time constraints.

I missed it’s inauguration last year, something I’m still unable to believe as I am omnipresent at car shows, but this will go in my yearly must-see list. The place is accessible, parking is ample, although I was charged Php 40.00 for a show that cost Php 50.00, and the event itself is obviously well-organized. Plus, they do claim that they are the biggest motoring event of the year. Some of my personal highlights would be the Lambo, the Hummer H2 with matching bling, the new CR-V, and of course the girls.