First time mo? Oo, eh. Last weekend, it was either this or another one of my family’s regular Subic trips. I’m getting tired of going to places I’ve been a million times to. So I scoured the internet for nearby unvisited gems to replace my already-planned weekend. Alas, Island Cove; it’s near, it’s popular and established, and I don’t know shit about it. I don’t know why, but I really, really enjoy swimming pools with stuff – slides, obstacles, etc. ala Splash Island.

So if this were as “fun” as a quick getaway in Splash Island, I’m happy. Cavite is just behind hometown-Muntinlupa. It took only 17 kilometers from the old Shell station (in front of the new Joilibee) along Alabang-Zapote road. Sunday traffic was a breeze.

I already knew what to expect (because I believe everything I read on the internet, haha), so I was just out to see if the negatives have already been worked out and if the positives were indeed worthy of praise. Recurring negatives were: the staff of Island Cove are not nice/accommodating, and ginto ang mga drinks at pagkain. I also took note of the strict no bringing of food and drinks within the premises rule. From the beginning, I knew that the only positive that mattered to me is if it had the “babalik ako dito” factor.

I noticed that the majority of the workers are old. It made sense how people ranted about the mataray staff. I could just imagine how long some of the staff have been working in Island Cove. Maybe it’s routine exhaustion or something. But then again when we arrived, heaps of people on excursions followed and in an instant they were under-staffed. They still tended to our needs so I feel there should be no negative generalization here.

Canned soft drinks cost Php 50. I did not even try to find out how much the food cost. Obviously they’re trying to capitalize on their strict no food and drinks rule after all, business is business. However, I wanted to know (apart from plainly being a cheapskate) how strict they were on baon. I sneaked in a packed lunch at the bottommost of my backpack. “Boss, ano laman ng baunan?” “Sir, kikay kit lang po ng girlfriend ko saka mga valuables na ‘di pwedeng mabasa.” But we still ate our lunch out-of-sight, inside the car.

Oceania is what they call the swimming pool area. It has 4 sildes, 2 swimming pools that ranges from 4-6 ft. (but not really) in depth, and 2 more kiddie pools. The two pools are arranged in such a way that one pool circles a smaller one. One of the kiddie pools is only about 3 meters across, while the other one is bigger and features kiddie slides and stuff. There are nicer huts which are for rent but there are also free monobloc tables on a first-come, first-served basis. Entrance is Php 200 per head and ours came with a free pass to the zoo.

I could not comment much on the other facilities of Island Cove, although we were able to walk the entire “island” from end to end. It’s huge. The zoo, which they call Wildlife Safari, is just about right. There’s a butterfly farm, a crocodile farm, and the usuals. It’s like a mediocre Zoobic in Subic. I wish I could’ve tried out fishing in their Fishing Village though, and catch a glimpse of the hotel area.

For me the place looks old. Well-maintained sure, but still bears the signs of the times. It looked great in pictures I have to say, even on my shots when I checked it back home, but kind of lacking in person. I feel they have to upgrade some facilities to make it a tad bit more interesting. Babalik ba ako dun? On my own free will, no. I gave Splash Island, Fontana in Clark, and even Monte Vista in Pansol the “babalik ako” factor but not Island Cove. Click on the picture below to view my photo blog on Island Cove. 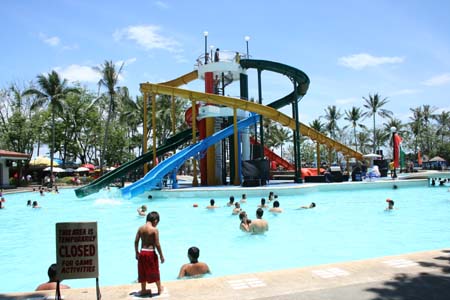